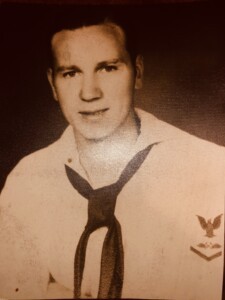 As a chaplain at Hospice of the Foothills in Grass Valley, Calif., I’m privileged to visit local veterans under the “We Honor Vet” program. During these Veteran Day visits, I present a certificate and an American-flag lapel pin and then exchange salutes with my fellow veterans.

On one such visit, I met Joseph “Joe” Feld at Cascades Independent Living. Since my initial visit, I’ve had several conversations with Joe, but last month, his family invited me to record his dramatic Pearl Harbor-survival story for posterity.

“If Joe forgets any details, just ask me,” said his 94-year-old wife, Betty, during an earlier conversation. “He’s been telling me the story for 75 years.” Betty still lives in their Penn Valley home where they recently celebrated their 75th wedding anniversary.

As usual, I find Joe napping in his recliner. He’s a man with a healthy-sized girth who has already eaten breakfast and is snoozing until someone wakes him for lunch. I call his name and he easily wakes, straightens a bit and smiles. He peppers his conversation with chuckles.

“Hello, Chaplain.” He speaks in trembling tones, typical of presbyphonia, the aging condition of the voice.

I remind him why I’d come, and he gives his permission to begin the recording.

“My name is Joe Feld,” begins the World War II veteran, interrupting himself with a chortle. “My name is one of the few things I do know.”

But Feld remembers more than his name – much, much more.

JOIN THE NAVY – SEE THE WORLD

He steels a glance into his dresser mirror, and I wonder who he sees. Does he see a 98-year-old hospice patient, or does he catch a glimpse of the 17-year-old adventurous kid who joined the Navy in 1939 under a recruiting program nicknamed the “Kiddie Cruise.”

“Under the Kiddie Cruise, we signed up as 17-year-olds. The enlistment meant we’d serve three years instead of the normal four, with a promised discharge when we turned 21 years old.”

Joe remembers it as an “easy decision” for several reasons. “The war was getting pretty rambunctious in Europe, so anyone who had a job was in good shape. Guaranteed employment sounded promising through my 21st birthday.”

He pauses to admit that he wasn’t a very good student in school and his St. Louis home was crowded with six boys and a girl. “My brother Walter was already in the Navy, so I decided to give the Navy a try.”

With enlistment came a monthly salary of $21. He remembers making rank each time he was eligible, earning raises to $36 and finally $54 when he was discharged under the rank of Chief Aviation Metalsmith. (Thirty years later, a recruiter failed to tempt me with a beginning monthly salary of $99.)

Feld went to basic training in San Diego where he remembers everything going “Fine and dandy, almost.” He laughs again. “I wasn’t good at marching.”

From his bootcamp class, Feld was the only one fortunate enough to be assigned to the spanking-new USS Enterprise. “The Big E,” as the carrier was nicknamed, was the sixth U.S. ship to be christened as “USS Enterprise” and was the predecessor of the nuclear-powered aircraft carrier deactivated in 2012.

Feld caught up with the Enterprise in the San Diego Harbor to find her in remarkable shape. She’d just returned from her 1939 maiden shakedown cruise and Joe boarded her excitedly since he already knew one crew member, his brother Walter.

On board, Joe joined a remarkable group of men called metalsmiths. “These men fixed everything but the aircraft engine,” Joe told me. “They repaired broken wings, landing gear and patched holes in the aircraft.” (See the actual WWII recruiting video for the metalsmith.)

Joe spent the next 18 months cruising the Pacific and watching the mighty fighter jets land on the Enterprise decks with piloting skills tantamount to a bird landing on a postage stamp floating in a swimming pool.

“We knew we were getting pretty close to war because Hitler was raising hell in Europe. Most of us knew that something would happen soon, but few of us believed it was going to happen in the Pacific, certainly not Pearl Harbor.”

Nevertheless, Feld recalls 1941 as the days when the Enterprise sailed almost leisurely back and forth between San Diego and Hawaii about six times. In Hawaii, they would dock at Pearl Harbor and disembark most of the sailors for shore leave.

With shore passes in hand, he and his friend “Duck,” left the ship for long weekends of relaxation. Feld recalls the gorgeous tropical duty almost dismissively. “All in all, it was nothing exciting, but it was fine.”

And it was still “fine” when they disembarked around Thanksgiving for a temporary shore assignment. Along with 30 sailors from the “Air Department,” Feld was sent on assignment to Ford Island to repair damaged planes or install new equipment. (Ford Island is the current site of the Pearl Harbor Memorial and the Pacific Aviation Museum.)

A few weeks after disembarking, on the evening of December 6, Feld and the other sailors watched the East-West Shriner game and ended up staying out all night. They returned to the barracks about dawn and began packing their “seabag,” a big canvas bag containing everything they owned. They were set to rejoin the Enterprise Sunday evening when she was scheduled to return.

Feld was changing clothes for breakfast that morning when U.S. Marines started raising the colors about 0745. Feld remembers that as the moment when “about 0800 that the Japanese (Imperial Japanese Naval Air Service,) started their bombing.

“The first I saw was from the barracks. I looked toward an explosion and I thought one of our planes had crashed. Then I looked out the window in time to see a Japanese fighter was circling the water tower with guns going, strafing the field. I was close enough to see the red circle on the plane.

“I called to the other fellas, ‘We’re under attack!’

“We all took cover in the mess hall on the second floor for about three hours while enemy planes were constantly firing around our position. “Outside, the explosions were huge. I’m sure I must have heard when the Arizona was hit.”

“The ships were sitting two in a row. Hitting one ship caused chain reactions and it was like shooting ducks in a barrel. After they took care of the ships, they came after us.

“By that time, we’d gone downstairs and were lying on our bellies as bullets flew through the barracks windows. The wood splintered on the columns that supported the roof and plaster rained down on us.”

Feld placed his hands over his ears, recalling, “the sound was intense at times.” I wondered if he could still hear it.

“I asked my friend “Duck” if he thought there was any chance of surviving this. Forever an optimist, he said ‘Certainly. Somebody will write about this day.’”

We traded the knowing smiles of combat vets and Feld continued his story.

“We decided we’d crawl outside on our stomachs to see what we might do. That’s when a bomb hit the USS California and sent shrapnel hurtling over our heads.”

“Hell with this!” Feld declared to his shipmates. “Let’s get back inside.”

Feld held a hand over his head and told me, “We felt so naked that I think a piece of paper over our heads would have brought some comfort.” A few minutes later, they were all safely inside where Feld says they “didn’t do much of anything until it was over.”

Feld took a breath, finding his way back through the story. Nearly 80 years later the next part adds an extra quiver to his aging voice.

A Chief Boatswain mate detailed Feld and others to help recover bodies. The Chief opened the ship’s store and issued a stack of blankets. He assigned four men to a blanket to carry the wounded and dead to the mess hall (dining facility).

On the dock, these teenage sailors witnessed destruction beyond their comprehension. Feld remembers seeing six battle ships lined up, all burning. The water itself seemed to be an inferno, with flames shooting eight inches high off the burning surface oil.

“But,” he said with a most certain pause, “We had our job to do, so we went down and brought back the bodies. We retrieved them out of the water, but we never knew if one was alive or what kind of condition he’d be in.”

“When you’re 20 years old,” he told me, “and you start fishing bodies out of the harbor, you don’t last very long. It’s a part of the war that I can hardly talk about because these guys had tried to swim in burning water to get to shore.”

“But, he said again, “we were told to get the injured men on a blanket and carry them up to the mess hall, so that’s what we did. We put a body on every table in the mess hall.”

He pauses to chuckle. It’s a nervous laugh as he doesn’t seem to know where to store this information.

“As we carried the bodies up to the mess hall, some were alive still. It’s hard to comprehend anything like that. Standing next to burning ships with flames going maybe 100 foot high, it was hot. You’re not equipped to take all that in.

“We made three trips down to the battleships to help recover men. Well, three trips were all I could take. I had never seen even a broken bone in my life.”

“But we survived it and went to other jobs that had to be done around the air station.”

The immediate job was to dig a defensive trench as most believed an enemy invasion to be imminent. They were so sure Japanese marines were coming ashore, that the sailors dug a trench equipped with a machine gun nest and started firing practice shots. But by evening, it seemed certain that there would be no invasion and the sailors returned to burying their dead.

Feld and his fellow sailors stayed on the island another six weeks under blackout conditions performing various duties. By the first of the year, most of them returned to the Enterprise believing it was their ticket home.

Instead, he and his shipmates would sail into naval warfare history. The Enterprise would be the first to draw enemy blood in the war. Feld would be aboard when the Enterprise participated in the Wake Island landing and the Doolittle Raid on mainland Japan. He would see the turn of the war in the Battle of Midway when Enterprise planes helped sink three Japanese aircraft carriers and a cruiser. During the war, the Japanese erroneously declared the Enterprise sunk three times, giving it the nickname “grey ghost.”

Clearly, Joe remembers quite a bit more than his name.

Norris Burkes is a retired Air Force Chaplain. He is a Board-Certified Chaplain with the Association of Professional chaplains. Read more about his experiences at www.thechaplain.net

Ten Thousand Years to Understand
Memorial Day Recalls the Ones Who Got Us Home
Do You Remember Where You Were Two Months Ago?
A Mother’s New Day
A Faulty Reading Reveals Real Fear