Listen to the audible version of this column: 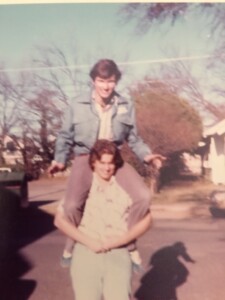 If you were a “Friends” fan, you’ll likely know the acronym “BFF” popularized by the Phoebe character in the NBC series. BFF or “Best Friends Forever” saw wide use among women, but not so much by men folk of my certain age.

Nevertheless, I’m proud to describe Roger Williams as my BFF of 44 years. Honestly, he shouldn’t have even become my friend, but he did.

I met Roger in 1975 at a Baylor University party for 100+ California students. I snubbed him because of his shoulder length hair, but my roommate and I calculated we needed a third person to share our cost.

Still, we shouldn’t have invited him to be our roommate. I was a short-haired, Pepsi-drinking, ROTC student. Roger was a beer-drinking fan of the American hard-rock band, KISS.

He constantly irritated me with his deafeningly loud music, but I reciprocated by playing his most-hated artist, Neil Diamond. At least we agreed on Linda Ronstadt.

We were roommates who shouldn’t have become BFFs. He could talk into the night about sports, but I hated sports. He piqued my interest in Baylor football only when he suggested a double-date in his Chevy Vega. Sadly, my dates wouldn’t ride on my ten speed.

After the games, which Baylor often lost, he wanted to splurge on big meals and ice cream. I was the tightwad directing us to McDonalds trying to save nearly every cent for school.

Even though both of us followed a pre-ministerial track, Roger didn’t often talk about his plans to enter ministry. I loudly declared a double major in Religion and Journalism, but Roger kept a low profile as a sociology major.

Nevertheless, we both enrolled in an 8 a.m. Greek class. When our alarm clocks rang, I raced my ten-speed to class. He typically followed ten minutes later in his Chevy Vega blasting his latest U2 album.

I definitely should not have brought him to my church –   me in my three-piece suit and he in bellbottom cords. He came as a new Christian looking to debate religion while I played the “staunch Christian” who kept his theology tight.

We both pledged a ministerial fraternity, where Roger had his pledge shirt imprinted with “The Dreamer.” Frat members thought the nickname was a reference to Nathaniel, the philosopher and dreamer Jesus chose as his last disciple. I knew Roger didn’t know Nathaniel, but he did know his favorite Aerosmith song, “Dream On.”

We really shouldn’t have been friends, yet we’ve been friends for a lifetime. We were the best man at each other’s wedding. We attended the same seminary after college. Our wives birthed their first child months apart and we regularly sought one another’s advice when buying cars and houses.

Eventually, I introduced him to healthcare chaplaincy where he found inspiration to leave the youth ministry for a hospital chaplain position.  For 40 years, we remained close, usually finding jobs not more than 90 minutes apart.

We were so different. How was it that we stayed friends?

I think we became friends because we honored our differences and never demanded that the other change. We learned from each other and looked out for one another. We saw each other’s heart before we heard each other’s words.

In these days of division, I want to encourage you to look in the unexpected places to find an unforeseen friend like Roger. Seek people of different colors, dissimilar political persuasions and unique sexual orientations.

Reach out to those with tattoos and facial piercings, men with beards and women with outrageous hair color. Don’t avoid differences or demand similarities. Find each other’s heart.

It doesn’t have to be difficult. Just walk up to someone different. Introduce yourself and tell them Roger sent you.

Four weeks ago, Roger was diagnosed with a fourth recurrence of Acinic Cell Carcinoma and was placed into hospice.

Last Sunday, we sat on his couch, shoulder to shoulder as we’ve stood for 45 years. As we said our temporary goodbyes, I held his cooling hand and laid my head on his shoulder. Then, in between my sobs, I told him that he was the best-ever BFF.

Family donations accepted online at https://newdaystockton.com/rwfund or at mail address below.