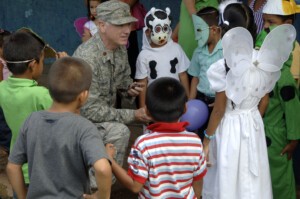 People don’t always get my sense of humor. Unfortunately, my years as a hospital chaplain infected me with a touch of gallows humor, an ironic wit handy for hopeless situations.

Nevertheless, ten years ago, I took that humor on a 90-day deployment to Panama with the Red Horse Squadron from Nellis AFB, in Las Vegas.

Red Horse is the Air Force version of the Navy’s storied Navy CBs (Construction Battalion). Both are trained to bulldoze the ground in a warzone while simultaneously defending the same ground with an M16.

We were in Panama as part of Operation New Horizon, a humanitarian project to build schools, clinics and playgrounds. The endeavor also gave our airmen the experience they’d need to build a barebones base in a battle zone.

From Panama City, our crew drove the famed Pan American Highway to get to our camp site. The road stretches from Alaska to Argentina, bridging two continents. It’s interrupted only by a 60-mile swath of swamp called the Darien Gap.

Once we got settled, Col. Darren Daniels assembled us for a pre-mission briefing. In the trees above us, howler monkeys, sloths and iguanas eyed the proceedings with territorial suspicion.

Daniels issued a sober warning of our dangerous working conditions in an area known to shelter paramilitary groups and drug traffickers.

“We are a long way from help,” he told us. “If anyone gets hurt, we may not get the help you need in time.”

I’d been to Iraq the previous year, so I didn’t feel too worried. Until, that is, Daniels mentioned snakes – particularly the fer-de-lance viper.

I took a jumbo breath of swamp air and expelled an uneasy laugh.

Afterwards, I retreated to the chapel tent to do a quick internet search. Apparently, the fer-de-lance causes more human deaths than any other American reptile. Surprisingly, over the next few days, my gallows humor inflated with these sobering facts.

“Don’t worry,” I told an airman constructing our showers. “If we get snake bit, we won’t suffer long. The fer-de-lance injects 105mg of venom in one bite. Kind of a waste,” I added, “because it only takes 50mg to kill you.”

At lunch that day, I asked the food-services guy if he knew that it was fer-de-lance birthing season?

He responded by throwing a heap of potatoes on my plate. “The mamas give birth to about 60 babies at once. The little guys even climb tent walls.”

Each comment seemed to bring the nervous chuckles I was looking for – that is until I took a lunchtime seat with Col. Daniels and his staff and reshared my newfound knowledge.

Daniels picked up a biscuit and pointed it my direction. “Didn’t we bring you here to boost morale?”

The table went quiet, so he graciously softened his tone with a smile. “I’m just thinking the chaplain should be sharing good news, not scaring the hell out of us.”

He said it all with a chortle, but we both knew the Shakespearean axiom, “Many a true word is spoken in jest.”

My commander was right. His squadron would go on to build outposts in Afghanistan. Not all would come home whole. So, for the moment, my job was to expose them to a faith that would build them up as they built up our humanitarian project.

Yet there are those Christians who think they should use fear to encourage people to take a step toward God.

Fear doesn’t work. People have enough hell in their lives without us presenting an angry God who’ll make them suffer an apocalyptic hell.

Sharing our faith is the act of exposing people to hope, not to fear or hate.

If faith works, and I think it does, then I have to believe the Apostle Paul’s writings in his second letter to his younger colleague, Timothy: “For God has not given us a spirit of fear, but of power and of love and of a sound mind” (2 Timothy 1:7).

And by the way, some week later, a Panamanian soldier killed a fer-de-lance just outside my chapel tent. Fitting end for one of those slithering things that’ve been interfering in God’s work for a long time.

Trolling for Souls
Happy Father’s Day to My Foster Dad
The Violence of Silence
The Big, Not-so-Bad, Misunderstood Wolf
A Memorial Day Note to My Neighbor