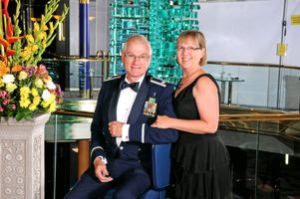 As I finish my 28th year in the Air Force uniform, I ask for this moment of personal indulgence. It’s a moment that has me humming the Hank Snow song with Jonny Cash, “I’ve been everywhere, man.”

I can’t rhyme quite as well as Snow, but if I had written it, I would sing about the military assignments where my Temporary Duty (TDY) orders have sent me. My song would sound more like:

A few months ago, I received one last set of military orders. Unlike previous orders that sent me into harm’s way, my latest orders allowed the destination of my choosing. But like previous orders, I still needed just the right time and place to break the news to my wife, Becky.

That perfect moment came last month during a Holland America cruise from Montreal to Boston. It began somewhere between Quebec City and Halifax, Nova Scotia, as my wife and I returned to our stateroom to dress for the ship’s formal dining night.

After Becky excused herself to the bathroom to do her hair and makeup, I pulled a suitcase from under the bed that contained the special tuxedo I’d covertly brought on board. I quickly dressed and left the room.

Thirty minutes later, like a kid on a date, I returned to knock on our stateroom door. When she opened the door, I surprised her with the smiling face of her chaplain man wearing the formal eveningwear of the military officer, the Mess Dress uniform.

I walked her to a special dining room, where an extraordinary French menu was being served. In the fading sunlight, the maître d’ seated us at a window table garnished with roses I’d ordered. After he uncorked a champagne bottle, he left me with a very bewildered wife.

As I had I prearranged, the ship’s photographer arrived and started taking pictures.

Becky was more than bemused, but returned her attention toward me as I pulled a tri-folded paper from my pocket and started my rehearsed speech.

“Becky, during the past 28 years, you’ve remained home while the military sent me to nice hotels for schools and conferences. More than that, though, you’ve waited and prayed for me to come home safely from places like Saudi Arabia, Panama and Iraq.

“Now I have one last set of orders for us to follow.” I then read the words she’s waited to hear for at least 10 years.

“Chaplain, Lieutenant Colonel, Norris Burkes is relieved from his current assignment and assigned to the retired reserve list effective 1 September 2014.”

Tears welled in her eyes. We both choked up over the news of my pending retirement.