Crossing the border into insanity

Home/Crossing the border into insanity
­ 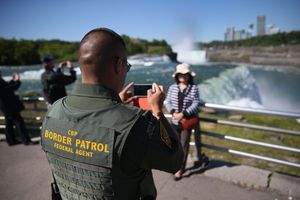 My wife and I were vacationing in Niagara Falls, Canada, last week when I took a six-mile run through pouring rain to the New York side. I was looking to claim bragging rights on running across an international border on the picturesque Rainbow Bridge.

At the American crossing, I waited for an entire busload of people to be processed, before a dour Officer Martinez motioned me to show my my passport.

“Where were you born?” he asked.

“What frog? Are you bringing frogs?”

He heaved a deep sigh.

Just when I thought he was going to drill a hole in my head to purge the stupid buildup, he asked, “Where are you going, sir?”

‘The Roadside,” I stuttered.

“Never heard of it.” He could smell fear.

“But you just said…”

“We are going to drive to Montreal to catch a cruise to Boston.” I explained.

After asking a dozen more questions, he finally said, “OK. Have a nice trip.”

Truthfully, while I’ve exaggerated this story, the crossing did inspire an idea. What would it be like if we could employ retired border guards to use their interrogative skills on potential gun buyers?

Honestly, I thought as I jogged the bridge, border guards make you wait in a long line and give the fifth degree when you pass, but the only thing you need to buy a gun is 10 minutes and a driver’s license.

If Martinez and his border colleagues could run gun sales, they’d be asking the pertinent questions, like “Gee, Sir, what are you planning to do with 3,000 rounds of ammunition?” or “Do you plan on firing this gun or just scaring Starbucks customers with your open carry bling?”

Just think how different things might be if a clerk with rudimentary therapeutic skills had asked the campus shooters in Santa Barbara and Seattle, “How are you really doing today, sir? Are you being bullied? Are you thinking maybe it’s payback time?”

Perhaps an inquisitive profiler like Officer Martinez might intercede with questions like, “Yes sir, silencers are legal, but why do YOU need one?” Or maybe he’d add, “Is this a “straw purchase” for someone who can’t legally buy a gun?”

I admit this column has dabbled far into hyperbole. I know we can’t employ law enforcement to sell guns.

But still, the facts are that we’ve had 74 mass shooting since Sandy Hook when we promised to God we’d do something about the violence. As people of faith, we must ask ourselves some valid questions like, “Why are people so afraid to leave their homes without a gun? Where does this fear come from?”

When I got back to the hotel, I was bemoaning my crossing difficulties with Amy, the clerk, when I asked, “Why do we need a border? We’re all the same here in North America.”

“Actually,” she said, “there are only two differences between a Canadian and an American.”

“A Canadian is an unarmed American with healthcare,” she said.