Daughter returns to Honduras to teach

Home/Daughter returns to Honduras to teach
­ 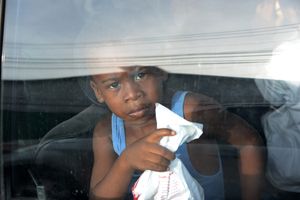 Next month, I send my firstborn, Sara, into the epicenter of the current immigration crisis. It’s a place so fraught with danger that residents are sending their unaccompanied children to America.

She goes to teach sixth grade in Marcala, Honduras. It’s a place we visited together in December 2012.

This week, I reread my travel journal and found a new appreciation for why Hondurans are coming to the U.S. by whatever means they can afford. The following is an excerpt from my journal:

I am at the San Pedro Sula Honduras airport standing at the car rental counter with my daughter Sara. She is leading a small humanitarian team from Denver’s Highlands Church to bring books to rural schoolchildren. I am the clueless columnist and doting father.

We meet our host, Roger, a 32-year-old bi-vocational pastor from the village we’ve come to help. I am introduced as the only monolingual guest.

We quickly load 300 pounds of books and luggage into a rented Toyota 4×4. We squeeze into the Toyota’s air-conditioned cocoon and hunt for fast food. We find burgers at a restaurant where a shotgun-toting guard walks the perimeter.

Thirty minutes later, we are driving on a lineless four-lane highway with full stomachs and plenty of jokes to translate. Suddenly, traffic slows ahead. I look for a car accident, but I see only a bloody blue tarp alongside the road that is covering the shape of a child.

Sara asks what we see, but I’m a dad and refuse to say.

Roger redirects our focus toward the sugarcane fields where trucks are being loaded with day laborers. The men stare blankly through the truck’s fencing like cattle wondering when they’ll be slaughtered.

Scores of machete-toting children are leaving the sugarcane fields on foot. Hunger seems to bleed from their faces, and their small bodies wear a tired that I’ve never known. Roger’s voice cracks as he says he wants a better life for his children, Sarai and Noel.

In the evening shadows, Sara manages to find the Marcala exit. We spend the next 90 minutes slowly driving a rocky and twisted road through the crevasses of an unsteady hillside.

I ask Roger if there are bandits hiding in the rocks. The question is translated, and the answer brings nervous chuckles.

We soon reach a two-story motel where we divide by sexes into two dimly lit rooms. The shower has an instant water heater, but I elect not to use it when I notice how haphazardly it is wired with electrician’s tape.

I lie on the bed to contemplate my day. During the 8-hour trip, I’d seen the roadside dead, dodged bandits and avoided electrocution. The existential pondering of death is a luxury few people have here. Many are lucky to survive birth. Then they ride on motorcycles before they can walk, work in the sugar fields before school age and bear children before high school age.

Truthfully, I’m not overly concerned about my daughter’s return visit to Honduras. During our visit, we were shown incredible hospitality by people who have so little. They protected her and loved her, and that’s why I am simply praying that God will help Sara and the community learn from each other.

I’m more concerned about the abusive slurs and hateful shouts that Americans have aimed toward Honduran refugee children in recent news clips. They are unbecoming of a country known for its beauty, and I’m betting most Americans are better than that.