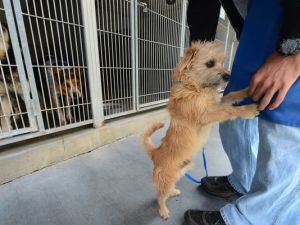 Some years ago, I adopted a puppy that we named Chewbacca — Chewy for short.

We got Chewy from a generous National Guard sergeant, but when I asked the sergeant about Chewy’s birthdate, he blushed. Then he stuttered.

My finely honed “chappy sense” told me there was something the man didn’t want to admit.

“No, chaplain, that’s not the problem,” he said.

We stared at each other in mutual understanding: The chaplain owns a “demon dog”!

Over the next few months, Chewy seemed to fulfill the expectations of his numerical heritage. Nothing was out of bounds for his dogged destructiveness.

He acted out every kid’s fantasy and actually ate my daughter’s homework. He moved his bowels over our Turkish rugs. He chewed on charging cables and speaker wires.

He seemed to be Kujo reincarnated, but without the froth.

At one point, while the dog was sleeping, I gathered my family in the darkened living room to whisper, “We might have a demon dog.”

My family stared back at me.

I recounted the story of Chewy’s birth and his mother’s checkered past.

“Yup,” I said. “And with Halloween approaching, I’m afraid we may be in for some bad juju.”

This exaggerated recollection puts me in mind of a much truer conversation. It was the one Jesus had with his disciples when they encountered a blind man in a crowded city.

Thinking the man’s blindness was bad juju, the disciples asked Jesus: “Who sinned and caused this man to be born blind? Was it this man or his parents?”

The blinded disciples saw only those two choices.

“You’re asking the wrong question,” Jesus said. “And you’re looking for someone to blame.”

“There is no such cause-effect here!” Jesus went on to say. “Look instead for what the Creator God can do.”

The disciples watched as Jesus picked up a smattering of dirt and mixed it with saliva to make mud. They stood dumfounded as Jesus put the mud on the man’s eyes and instructed him to rinse at a local pool.

When the man followed Jesus’ instructions, he was healed.

Jesus used the miracle of the blind man to spin the disciples’ multiple-choice question into a much more complicated essay question about life.

In effect, Jesus was saying don’t look for a cause, look for the purpose. And in this case, the purpose was twofold.

First, Jesus demonstrated God’s power by using his saliva to heal a man of his physical blindness.

But, maybe more importantly, he used that miracle to spit into the eyes of spiritually blind townspeople — people who had become so accustomed to judging others that they couldn’t believe their own eyes, nor could they see beyond their narrow perception of the world.

Fortunately, by the end of the day, the crowd saw what I came to see about Chewy. Namely, that making judgments based on meaningless designations such as birthdates, gender, skin color, accents or manner of dress is really just “barking up the wrong tree.”

Norris Burkes is a syndicated columnist, national speaker and author of No Small Miracles. He is an Air National Guard chaplain and a board-certified hospital chaplain with the Association of Professional Chaplains. You can send comments to Chaplain Norris at ask@thechaplain.net

Trolling for Souls
Happy Father’s Day to My Foster Dad
The Violence of Silence
The Big, Not-so-Bad, Misunderstood Wolf
A Memorial Day Note to My Neighbor