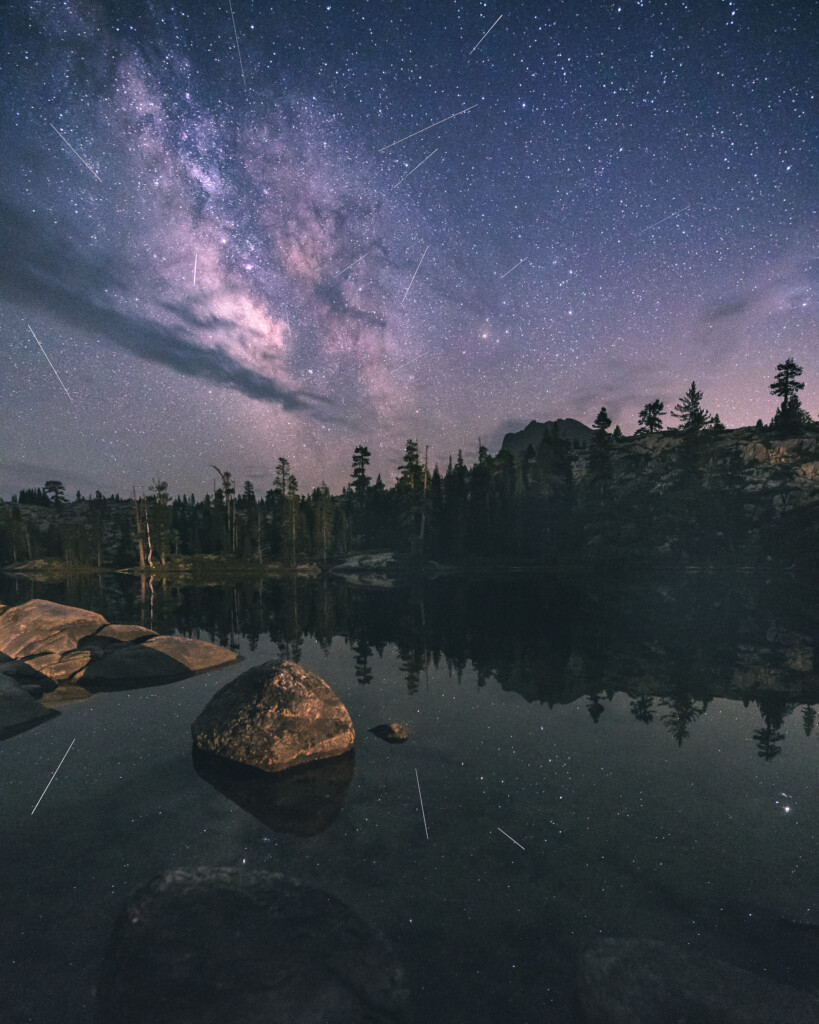 This photo is a time lapse photo of the Perseids. Shot by my friend, John Bevel on August 2018 Long Lake CA.

Becky and I have been baking in our 104-degree summer, and the heat sparked a deepening desire to get cold, chilled, and maybe even a bit wet. So last week we left our home in the fire-prone California foothills in search of chill-lax.

Four and a half hours later, at the end of a winding highway, we found our weekend retreat on California’s Mendocino coast. Where water temperature and air temperature came to an agreement at 52 degrees, we discovered the intersection of beauty and chill.

It’s here the coastal waters accelerate their Jekyll-and-Hyde transformation from the still waters of the Santa Barbara coast to the ship-crushing waves of the Oregon border.

After we checked into our hotel room, we sat staring at the ocean blue until the hypnotizing waves of the Pacific lulled us into a long afternoon nap.

Rest was important if we hoped to fulfill the nighttime mission I had planned. We’d come to glimpse the falling stars of The Perseids, the annual meteor shower, peaking in mid-August.

To see them, only the blackest of midnight would suffice. Our celestial treasure hunt sent us up a narrow road, out of the foggy coast and deep into the coastal redwoods.

The roadway darkened quickly. It was the kind of dark that could make it easy to lose one’s soul if it weren’t divinely anchored. The kind of void that Harry Potter and his classmates would seek.

Our car’s adaptive headlights swung from side to side, searching for signs of life. Foxes darted deeper into the forest and a masked bandit dove for ditch cover. An ambling black bear moved like a shadowed tumbleweed, giving no hints he would yield. We did, however, and gave a skunk a wide berth while braking for deer silhouetted by the forest glow.

Just before midnight, we pulled into a clearing and stepped from our car. As our passenger-compartment lights faded, a meteor scratched the night sky like someone cutting diamonds.

With the giddiness of celestial prospectors, we scurried out to set up beach chairs and blankets. During the next 75 minutes, we watched icy droplets rip the heavens open like a zipper. We counted 30 of the little sky-scratchers as they etched straight lines across the near moonless night, flying a perky 18 miles per second. It was as if God was busy sketching architectural plans for another universe.

We “ah’d” and “ooh’d” and “whoa’d” like children watching a circus act and, at times, jumped in startled wonder as if someone had dropped an ice cube down the back of our shirts. Eventually, we quieted. Speaking only in whispers, fearing we’d be unable to hear God’s voice otherwise. Nothing manmade could ever match the stunning show God gave us from the frosty slivers sailing across the night sky.

As we drove back to our hotel that morning, I reflected on what I’d heard God say.

“Wait,” you ask, “does God really talk to you, Chaplain?”

No, not in audible tones. However, I do think I heard something divine that night. Something detected only in stillness and quiet.

Suddenly, I knew once again that I’m not alone. God is with me.