No special privilege before God 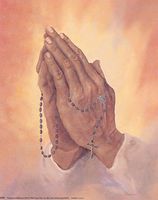 Six years ago, I took an early-morning cab to the Sacramento airport, where a smiling ticket agent from Southwest Airlines greeted me at the passenger desk. She marked my boarding pass with a little squiggly line and told me that I should hurry if I hoped to catch my flight on time.

A few minutes later, I stood in the airport security line where an agent examined the cryptic doodle on my boarding pass.

“Looks like you’ve been randomly selected for special screening,” he said, as he directed me toward a security cubicle. In other words, I was a marked man, specially selected to “hurry up and wait.”

I tried to tell him I was traveling on military orders. I even tried walking sideways so he’d notice the National Guard chaplain logo on my shirt, but he was insistent that my military status didn’t matter. Since Miss Smiley-Face had infected my boarding pass with the squiggly line, I was like every other suspected terrorist.

Inside the cubicle, the officer instructed me to raise my arms while he buzzed my torso and procreative parts with his search wand. He wasn’t granting me any special passage.

Inside my head, I was hearing my privileged voice as it said, “You’re above the rules,” and “Rules are made for bad people.” I know that’s crazy, but sometimes that voice sounds so completely trustworthy that I’m sure it’s OK to adjust the rules for my benefit. That voice can sound so honorable that I’m sometimes sure everyone else will trust it, too.

It’s the same privileged voice recounted in Matthew’s gospel when a group of religious leaders sought special placement in the Eternal Security Line.

The men came to the Jordan River seeking baptism from Jesus’ crazy-eyed second cousin, John the Baptist. They were seeking baptism, not for its life-changing possibilities, but because they’d heard it was the cool thing to do. Moreover, they figured J-the-B would enjoy the notoriety of dunking such a holy entourage.

Instead of being honored by their presence, the Baptist dude exploded on them, calling them a “brood of snakes.”

“What do you think you’re doing slithering down here to the river?” he asked. “What counts is your life. Is it green and blossoming? Because if it’s deadwood, it goes on the fire.”

I suspect we recognize the deceptive voice of privilege, if we’re honest. It’s the voice we use when we insist that people accept us simply because we’re a Christian, or because our family is rich, or because we speak English or because we are tall white men.

But as my Baptist friend said more than 2,000 years ago, there is no special privilege before God, where all of our self-justification becomes deadwood.

In fact, “deadwood” is a most apt description, because that’s exactly how I felt six years ago as I stared down an empty jet-way. Apparently, the pilot had exercised his privilege to leave without me.