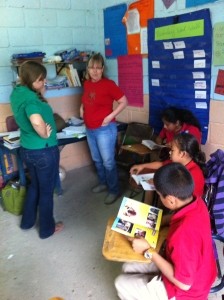 This past week, my wife and I flew to San Pedro Sula, Honduras, to visit my daughter and to bring three suitcases of books donated by my readers for Honduran children. The visit inspired some spiritual perspective into the privileged life I live as a North American.

For instance, there’s nothing like flying into the murder capital of the world to bring perspective to the Biblical question: “For what is your life? It is even a vapor that appears for a little time and then vanishes away.”

According to a 2014 UN Global Study, San Pedro Sula is the world’s most dangerous city with three murders a day, making a Honduran life almost 15 times less valuable than anyone else’s on the planet.

Those facts alone sent us speeding out of the city in our rented four-wheel drive and toward the rural town where our daughter, Sara, teaches in a private bilingual school. Yet even at highway speed, we felt like we were passing from the proverbial frying pan and into the fire. Traffic accidents represent the second leading cause of violent death in Honduras.

Four hours later, we rolled into the darkened, foggy town of Marcala and checked in to our hotel.

Our work began early the next day when Sara introduced us to her fifth/sixth grade combination class at the Marcala Bilingual School. Soon we could see the education system offered another lesson in perspective.

The humble school was a well-kept two-story, cinder-block affair sitting atop a bare cement floor, protected from tropical rains by only a corrugated tin roof. Walls were well decorated while the windows were simple cut-outs in the cinderblock walls with steel bars to keep out the unwanted.

Sara assigned us to teach the English block, so each day we gave grammar lessons, graded papers, proctored exams and played charades with English vocabulary words.

The lessons inspired perspective into the difficulty of learning English as a second language, a language with 42 pronouncable sounds. The use of the definite article makes English particularly tricky. But, trickiest of all is that most verbs have three forms. Still, the kids persevere because they know that English brings increased opportunity.

We ended our lesson just before lunch so that we could distribute some of the donated books to Sara’s class. We unzipped the suitcase and quickly witnessed a fresh perspective into the quenching power of books to a thirsty mind. After selecting small piles of books, the children returned to their desks where they read the books aloud to one another.

Thirty minutes later, we were eating our lunch and watching the kids play soccer when Sara pointed out a slight ninth-grade boy. “That’s Jaime,” she whispered. “He’s a real math whiz. You should go meet him.”

During the next several minutes, Jaime inadvertently revealed some perspective into the privileges of being a North American versus a Central American.

Speaking in perfect English, this storeowners’ son described the joys of playing video games and riding a bike. But most of all he enjoys studying. “I want to go to Harvard or Yale,” he added with a naïve confidence.

When I reported back to his teacher, my daughter was moved by his determination.

“I hope so,” she said. “Unfortunately, our town doesn’t have a bilingual high school, so he may have to settle for public school where opportunities are limited.”