Love for child greater than life

Home/Love for child greater than life
­ 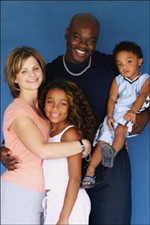 Jessica Bracy “always counted on having a baby like everyone else.” And in 1997, she hoped to begin that family with her new husband, Kevin Bracy, and his daughter, Kendra.

But by 2000, after three failed pregnancies, it was becoming obvious that Jessica’s body was not reacting like everyone else’s.

In 2001, she and Kevin tried a new approach. This time, at the first sign of trouble, Dr. Orel Knight placed Jessica on house arrest for the next 10 weeks.

Even with this precaution, her water broke during her 18th week, and Jessica remembers the doctor’s grim prediction: “You’re going to lose this baby, too.”

Desperately, she tried to bargain. “What can we do? I’ll do anything and won’t complain.”

Dr. Knight admitted Jessica to our high-risk maternity unit, where she would stay in bed until delivery.

Jessica remembers those days as a test of her faith in which she was determined to believe that “whatever happens makes you stronger. The pressure of laying there for weeks and having this little ‘miracle boy’ depend on you is an enormous responsibility.”

Jessica proved more than up for that responsibility when on July 9, 2001, she delivered Kobe J. Bracy, at 2 pounds, 5 ounces and 15 inches. But with only 28 weeks of formation, Kobe was in trouble.

Jessica remembers hearing neonatal doctors say “it would be a miracle if Kobe survived the first night.” It quickly became apparent it would take a string of miracles. He would need to survive the next two weeks for lung development and even then, doctors were cautioning the Bracys that Kobe wouldn’t likely walk or talk.

At that point Jessica recalls thinking it was “important to choose which voice we were going to listen to. God brought us this far. The reason wasn’t yet clear, but Kobe was going to bring it all together.”

And bring it together he did. Kobe spent two more months in our neonatal ICU. And from his touch-and-go start, Kobe became what we affectionately call a “feed and grow,” a baby needing only to eat and gain weight.

After only 8 weeks in our NICU, when Kobe was 3 pounds, 15 ounces, his parents convinced doctors they’d learned enough to care for him at home.

Today, Kobe is a fast and furious 4-year-old. However, he’s not entirely well. He has a chronic colon disease that causes occasional hospitalizations. The flare-ups come with pain and more predictions that he has a 90 percent likelihood of colon cancer.

“Getting pregnant meant a life change,” Jessica said. “At first we thought, ‘Oh my gosh, this is great,’ then, ‘This is tough.’ But I’m a mom now, and the love for a child inside of you is greater than anything you have to do. After seeing Kobe, I would do it a million times again.”

On July 9, 2005, Jessica lost another child, Kaleb Julius Bracy, 22 weeks into her pregnancy. This spring, the Bracy family will be the Sacramento area’s poster family for the March of Dimes. On April 30, I will walk along side them in the March of Dimes Walk America campaign.