Want to help? First, you listen

Home/Want to help? First, you listen
­ 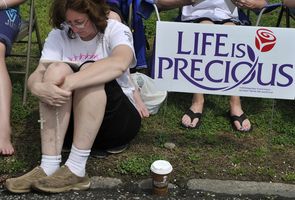 In the summer of 2007, I took a break from the usual cafeteria food to meet a colleague in a restaurant two blocks from the hospital where I worked. With the mercury climbing toward 100, I found a shaded shortcut past the office of an obstetrician who occasionally would perform abortions for medical reasons.

As I neared the office, I saw two people carrying protest signs. The first protester was a man waving a placard with pictures of aborted fetuses. As if it weren’t hot enough already, he was making every effort to heat up the abortion debate by harassing anyone who neared the doctor’s office.

“Do you know that they are killing babies in there?” he asked a couple who quickly pushed a stroller past him and into the office. Then he turned and repeated the question to me. You don’t need to be the sharpest tool in the shed to conclude this man had no interest in dialogue, so I kept walking, giving no hint as to my beliefs or feelings.

I suspect he was unaccustomed to being ignored, because he showered me with with hate-filled accusations that I was an abortion ally. Perhaps he thought that if he yelled loudly enough, I surely would change the views he assumed I had.

I quickly made my way across the street where a female protester respectfully displayed a sign that read, “Adoption is an Option.” In contrast with the accoster, I couldn’t help but admire the woman, whose sign quietly offered options, even if she didn’t agree with all of life’s choices.

“Good afternoon,” she said as I approached. I returned her greeting, pausing just long enough for her to notice my ID badge.

“I’m glad you are available to the women here,” she said.

When I arrived at the restaurant, I described my encounter to my colleague and we sadly agreed about how disgusting it was for the male protester to be offering only condemnation and judgment to those seeking medical treatment.

In short, you’ve got to imagine a world without grace.

Like many of life’s issues, abortion is an issue that can’t be fully explored on a placard. Our lives don’t fit on placards; our lives often are complicated, confusing and complex.

And the only way we can help people unravel life’s complications is to sit with them in their hurts, listen to them and help them explore their options.

When I returned from lunch, the two protesters were still there, albeit a bit more wilted. I made a purposeful walk toward the woman holding the sign. I figured someone should offer her some positive reinforcement for her style.

“I have three adopted children, and I appreciate the way you’ve chosen to express your views,” I told her.

“Make sure you’re drinking plenty of water,” I told her and kept walking.

I said nothing to the man. I figured he wasn’t listening.